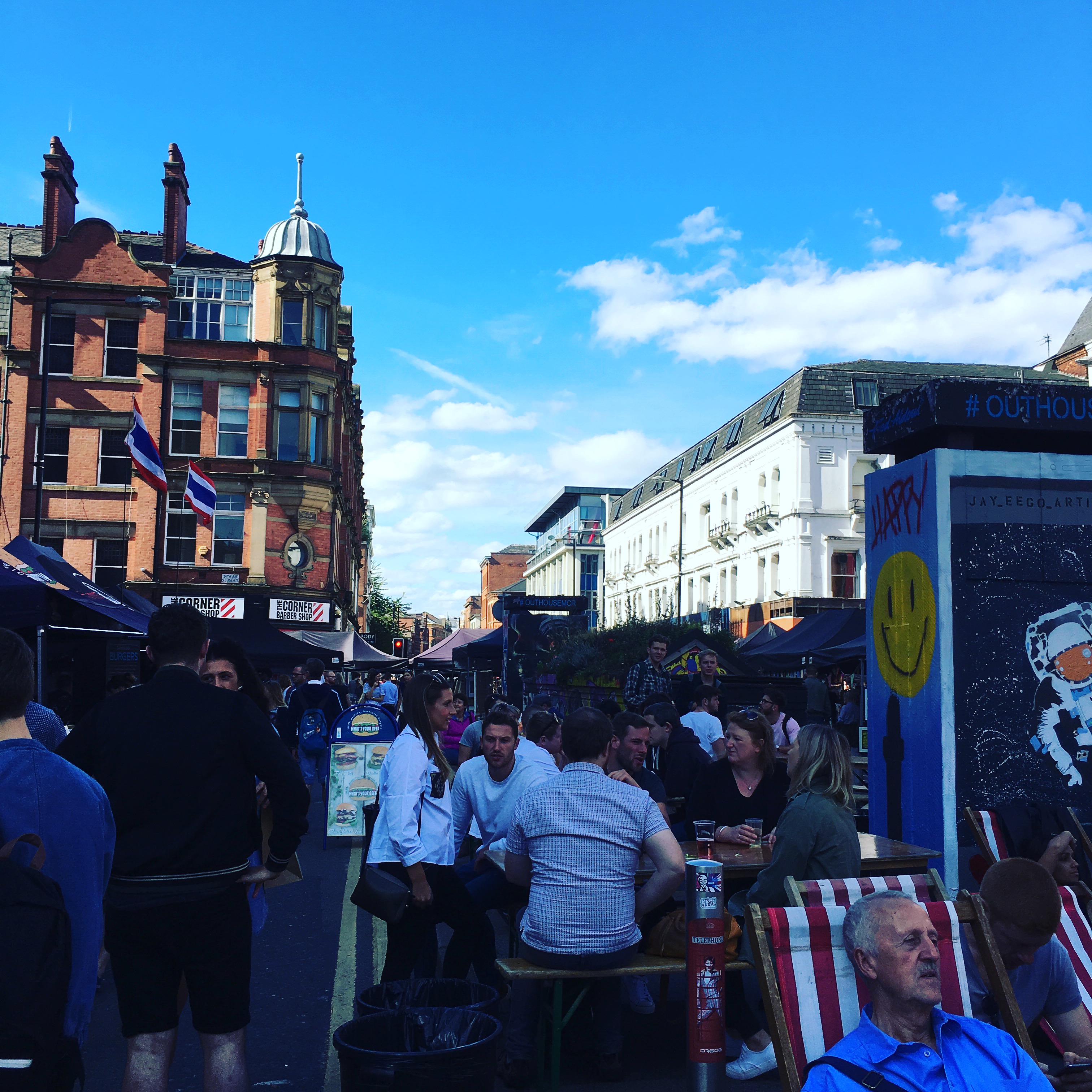 On the sixth day…

So over the weekend I wandered a little more than usual, the streets seemed busier and the hustle bustle of the big city more invigorating. The sun has a knack of heightening the senses, I think because we are so used to the ‘triumphant Rain’ as Lemn Sissay stated with such vigour, it is inevitable that we think of the rainbows, the better times and the more wholly enjoyable life.

This weekend was no different, the blast shadow cast by the Beetham Tower was one of the few spots of shade, cool revitalising shade.  Here pride and happiness are generally all that is on the menu. Complaining isn’t really something that’s in our blood, I suppose it’s the hard knock life attitude that growing up in the wake of a big city brings, or maybe it’s the fact that our precious city centre continues to peacock in the face of those surrounding it. She grows higher, bolder and more devastatingly formidable as the glass and steel soldiers rise in unison from the earth.

It was a Saturday afternoon, the air was milder than earlier in the day and left a sweet sticky taste on the tongue. I was meeting up with a friend of mine who was visiting from London for the weekend. I was definitely underprepared for the conversations which were to come during our social booze (which is often referred to as a catch up) purely to disguise its nature. The first words he spoke held a life’s worth of weight with me.

I had always been someone who had conveyed his pride in the place of his birth to all who were willing to listen, a preacher of the sticky pub carpets and an advocate of the undecorated edginess of the Northern Quarter. But to hear the words of someone who had no draw to this woman and her curvaceous form, really hit home hard.

“I find it really strange… Why is everyone so happy? Somebody sat next to me on the tram earlier and started a full blown conversation about life.” Looking rather perplexed as to why this was an oddity, I held my wagging tongue and all its anecdotes and let my friend continue. “What’s more was, he sat and listened to me. He asked questions that my friends and work colleagues back in London don’t ask … and he genuinely listened. I wouldn’t be surprised if he could tell all and sundry about my problems.”

I didn’t see the difficultly he had experienced in someone being welcoming, I mean you could tell a mile off he wasn’t from here. Not because of his mannerisms or the way he dressed because let’s be honest, you can be you in Manchester, and we won’t bad an eyelid, wear what you want and do what you like to do, within the boundaries of legality of course. But more because he was probably looking dazed and confused as to his location and destination as he hadn’t visited before.

I laughed and took another gulp of the sticky toffee substance sat pooling in my pint glass. “What’s funnier than that is, if he was to bring it up to another complete stranger they would probably offer advice too. I suppose we are just that way inclined, the little differences mean so much up here. A passing smile is a currency in itself.”

Maybe as the Gallagher’s use to call it the Sunshiiiiine was at hand for everyone feeling so optimistic and open-armed, but I would like to think not, the sun and rain duality is just a part of a fulfilling palpable life here in Manchester. I guess we just do things differently after all.